The Good guy, wearing all white leather and a large 10-gallon hat rode into town and tied his horse (named Hillary) in front of the local Saloon.

He pushed his hat back and with silver spurs jingling he walked, slightly bow-legged into the Saloon. When he got to the end of the bar, he motioned to the bartender with a wave of his hand.

The bartender obviously knew the man and said; Howdy Sheriff, what’ll you have?

The sheriff smiled back and told the bartender; I’ll just have my usual,Joe, a cup of coffee.

While he waited for his coffee, the sheriff looked around the room and sitting in the back of the bar, in the darkness was a man he recognized. He walked towards the man who, finally realizing who he was, jumped up and reached for his gun.

But he stopped because, like lightning, the Sheriff already had his gun in hand, cocked and pointed directly at the mans head.

With sweat breaking out on his brow, the man slowly moved his hand away from his gun, sat back down and with a sickly smile, asked; What can I do for you, Sheriff?

The sheriff swirled his pistol around his finger a few times, just for show, and then dropped it into its holster. Then he looked back at the man and asked;

Are you by chance Al Sad, from over Damascus way?

The man froze for a moment but finally he responded with; No Sir, I come from down in Syr. I run a big ranch there and I have people near there who will vouch for me. In fact, one of them is Sheriff Russ. Check with him if you want.

The Sheriff thought about the situation for a moment and then he walked up to the stranger and staring the man directly in the eye said;

Well, I hear tell of a cold-hearted gang leader called Al Sad, in Damascus who poisoned the water in several wells near there. I even heard that he did it just for the Hell of it.

The stranger was sweating profusely by now, but he shook his head again and said;

I swear, Sheriff, I would never do such a dastardly thing and besides, I’ll be around here for a few days, buying some farming chemicals for my ranch.

The Shrriff  raised an eyebrow at this but he kept quiet, so the stranger continued with; So, if you don’t mind, I’ll just move on and meet some friends that are waiting to see me. But, you let me know if I can help you. OK?

At this, he stood up to leave, but the Sheriff held up his hand to stop him and with a cold look in his eyes, told the man from Syr;

I’m gonna check on you with your Sheriff Russ and I’m also going to get advice on what to do about you from our town council.

At this the man from Syr smiled to himself and as he walked away, he said over his shoulder; You do that Sheriff, You just do that

Well, it was a week later before the Sheriff got a long telegram from Sheriff Russ who gave a glowing report about the great friend of his from Syr.

It then took almost a week before the town council could be rounded up and hold a meeting. At their meeting they all argued about everything but the man for Syr.

Frustrated, the Sheriff finally stood up and announced that he was going to arrest the man from Syr, and figure the details out later. He figured that if he was guilty of heartlessly poisoning people, then he just might do the same to someone in his town.

That afternoon, the Sheriff, all dressed in white, with his shiny silver pistols on his hips, walked over to his beautiful horse, and realizing he was thirsty, he took a long drink from the water pump next to his horse, mounted up and rode out of town.

They found him the next day, just a mile out of town lying beside his dead horse. It looked like, with his last desperate breath, he had scratched into the dirt on the side of the road, the following;

I Shoulda Shot him when I had the Chance!

Sound familiar to anyone? 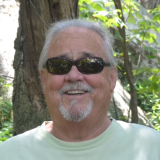 As a Storyteller from the South, it was only natural that I turned to writing about the many fantastic things I have seen and experienced in my decades traveling in my RV. I love to write about what I see, with my favorite being; interesting and amazing places. Tiki Bars with character, Beautiful Sunsets as well as Interesting People and Great Conversations. I am a decent photographer, a terrible investor, and a good friend at those who get to know me.
I have written and published a number of books on Amazon!