Cold means something different to a Floridian.
OK, don’t get mad …… yet. You haven’t even read my opening sentence!

I now live in Florida, south of Tampa and in a normal Winter, we just don’t get cold.

Not Cold like it was in the foothills of the Blue Ridge Mountains in Virginia where I grew up and spent the first thirty or so years of my life.

And we don’t get anywhere like the Cold weather you people in the northern states have to suffer through.

To us, our winter consists of sporadic spurts of uncomfortable weather that is driven down to us by strange happenings with cold fronts and such other winter weather things that you people who live “up there” know more about that us Floridians.

If you noticed, I said “uncomfortable” weather. To us, uncomfortable means we had to play golf with a pull-over on instead of just in a golf shirt.

Uncomfortable means rooting through your closet for a pair of long pants to wear that day instead of the year-round wardrobe of shorts.

Uncomfortable is putting the convertibles top UP for the trip to the supermarket.

Uncomfortable means wearing a pair of shoes and socks instead of your favorite flip-flops.

Hopefully you get the point. We Floridians are just not exposed to such horrendous weather as you people UP there accept as the winter norm.

Winter is tough on pretty much everyone.
No, Really! Some Winters are hard on everyone in the country depending on Mother Nature. And honestly, we Floridians aren’t so isolated that we don’t see how hard the weather has been on other people.

We might be Southerners, but we also have TV, just like you people who live up North. We watch the same “news-less” news shows that you do.

And we get just as bored as you do when they spend hours showing the same news people standing in front of enormous snow banks explaining to us all, for the umpteenth time, how much snow has fallen on some in the far reaches of the North.

And, when we go to our favorite Tiki Bar, we have the same conversations as you do. You will hear such things as;

I even hear that all of the cheap Airlines are losing their Butts. Every plane coming down is packed, and no one is flying back. Once they get here, they end up flying back with partial loads.

The other night, in my favorite Tiki Bar, someone even told me that if this keeps up the whole state of Florida could be put on rationing for Vodka and Tequila.

The SnowBirds are drinking so much of the stuff that the Distilleries are having trouble keeping up with demand.

Anyway, the funny rumors you hear down here go on and on, just because of the weather we see repeatedly blasting the Northern reaches of the continent.

But, you should all look at the positive side of being Snowed in.

Really. There is an old adage that says something pithy about taking the bad and making something good from it.

You know, try to be positive and maintain a good attitude, and all of that. You know, let’s make lemonade from all of these lemons thrown at us.

So ….. just to help those SnowBirds who went glassy-eyed over the continually sorry weather here are a few things you can do to improve your mood.

These are just a few examples of things that might seem bad about the continually sever winter you are experiencing, but as I have shown, you should look at the positive side of each of these and other set backs Mother Nature has thrown at you this winter.

And, there is one more thing you can try.

All of the major North/South Interstate highways are typically kept clear throughout the Winter.

So, Get in your car and COME ON DOWN! It might be Winter down here, but it’s a Tropical Winter.

Buy this NULIVIN Design placed on a quality Zazzle product of your choice. Click here to check out the design and options. 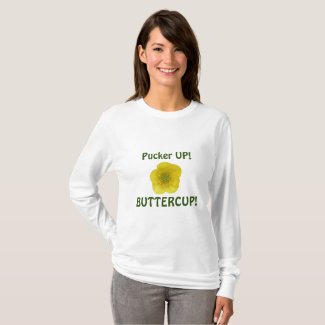 Pucker Up Buttercup
by Nulivinproducts

You the readers are free to enjoy and share this article with your friends, but if you wish to use it commercially then you must have the author’s permission, in writing, beforehand.