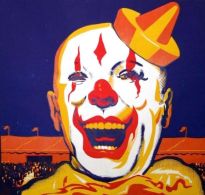 Need a little giggle in your day?

Or maybe you just need a smile, real bad?

Take a break and spend a minute to read these jokes that, at one time or another, made me laugh.

Three contractors are bidding to fix a broken fence at the White House in D.C. — one from New Jersey, another from Tennessee and the third, from Florida. They go with a White House official to examine the fence.

The Florida contractor, Jonathan, takes out a tape measure and does some measuring, then works some figures with a pencil. “Well”, he says, “I figure the job will run about $900: $400 for materials, $400 for my crew and $100 profit for me.”

Vito from Jersey doesn’t measure or figure, but leans over to the White House official and whispers, “$2,700”. The official, incredulous, says, “You didn’t even measure like the other guys! How did you come up with such a high figure?”

And that, my friends, is how it all works!

What if you were playing in the club championship tournament finals and the match was halved at the end of 17 holes?

You had the honor and hit your ball a modest two hundred fifty yards to the middle of the fairway, leaving a simple six iron to the pin.

Your opponent then hits his ball, lofting it deep into the woods to the right of the fairway. Being the golfing gentleman that you are, you help your opponent look for his ball.

Just before the permitted five minute search period ends, your opponent says: “Go ahead and hit your second shot and if I don’t find it in time, I’ll concede the match.”

You hit your ball, landing it on the green, stopping about ten feet from the pin.

About the time your ball comes to rest, you hear your opponent exclaim from deep in the woods: “I found it!”

The second sound you hear is a click, the sound of a club striking a ball and the ball comes sailing out of the woods and lands on the green, stopping no more than six inches from the hole.

Now here is the ethical dilemma:

Do you pull the cheaters ball out of your pocket and confront him with it or do you keep your mouth shut?

The Hypnotist and the Senior Center

It was entertainment night at the Senior Center .
Claude the hypnotist  exclaimed: “I’m here to put you into a trance; I intend to hypnotize each and every member of the audience.”

The excitement was almost electric as Claude withdrew a beautiful antique pocket watch from his coat.  “I want you each to keep your eye on this antique watch. It’s a very special watch. It’s been in my
family for six generations.”

The crowd became mesmerized as the watch swayed back and forth, light gleaming off its polished surface.

Hundreds of pairs eyes followed the swaying watch, until, suddenly, it slipped from the hypnotist’s fingers and fell to the floor, breaking into a hundred pieces.

It took three days to clean up the Senior Center .
Claude was never invited back to entertain.

How to Impress Young Women

A 60+ Senior walked into his new Gym and started walking on the treadmill.

Shortly, a beautiful young woman, with a perfect body, walked in and started warming up with some stretches before her workout.

The Senior was so taken aback by her body that he turned and asked one of the Gym Instructors standing next to him;

Hey, What do I have to do to Impress that Young woman over there.

The Instructor took a quick look and responded with;

Go and Exercise the ATM machine right next to her!

A man’s wife, being the romantic sort, sent her husband a poetic text one day, in which she said:

The husband, not being the romantic type, replied, “Dear,  I’m on the commode. Please advise.”

The SENIOR and the DOCTOR

There’s nothing worse than a Doctor’s Receptionist who insists you tell her what is wrong with you, in a room full of other patients. I know most of us have experienced this, and I love the way this old guy handled it.

A 75-year-old man walked into a crowded waiting room and approached the desk. The Receptionist said, ‘Yes sir, what are you seeing the Doctor for today?’

‘There’s something wrong with my dick‘, he replied.

The receptionist became irritated and said, ‘You shouldn’t come into a crowded waiting room and say things like that. ‘

‘Why not, you asked me what was wrong and I told you,’ he said.

The Receptionist replied; ‘Now you’ve caused some embarrassment in this room full of people. You should have said there is something wrong with your ear or something, and then discussed the problem further with the Doctor in private.‘

The man replied, ‘You shouldn’t ask people questions in a roomful of strangers if the answer could embarrass anyone?‘, but he decided to walk out, waited several minutes, and then re-entered.

‘There’s something wrong with my ear,’ he stated.

The Receptionist nodded approvingly and smiled, knowing he had taken her advice.
‘And what is wrong with your ear, Sir?‘

The waiting room erupted in laughter.

A man is sitting at home alone when he hears a knock on the front door. He opens it to find two sheriff’s deputies there. One of the deputies asks if he is married. He says, “Yes, I am.”

The deputy then asks if he could see a picture of the man’s wife. The guy says, “Sure,” and gets out a photo to show them.

The deputy says, “I’m sorry, sir. But it looks like your wife’s been hit by a truck.”

Shocked, the guy replies, “I know, but she has a great personality and is an excellent cook.”